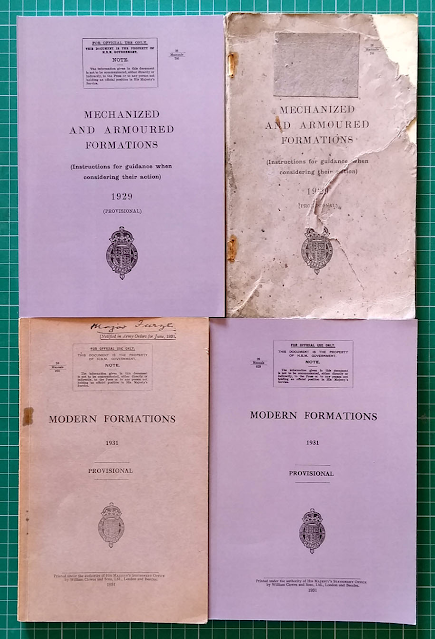 If you have an interest in the Experimental Mechanized and Experimental Armoured Force of the late 20s and early 30s, chances are you have come across references to the Purple Primer (or Mauve Manual as General Martel preferred to call it). This was a small pamphlet called Mechanized and Armoured Formations, published in 1929, compiled by Charles Broad and was followed up by a second pamphlet, Modern Formations, in 1931. These were very influential on the armoured exercises of the Experimental Armoured Force(as it was renamed in 1928).

These pamphlets and their texts have been near impossible to find either in hard copy or on line so it was wonderful to find out today that they have now been issued in print on demand. As I have been looking for them for about ten years it was a matter of minutes to order them - now all I have to do is wait for them to be printed and delivered through the Covid affected postal system.

For anyone similarly wishing to order, the links are below:

(The photograph is used without permission from the post on WW2 Forum where I learned of thier availability today. I will of course take the photo down if requested)

Posted by Vintage Wargaming at 09:09

This blog is a work in progress. Contributions are welcome using the comments system. If you provide any information, please could you cite your sources.

Get this Recent Comments Widget